We use our computers to handle thousands of tasks in a day. From video streams, video games, work, and much more, handling all these tasks doesn’t come without a side effect; heat. Our computers produce a huge amount of heat daily; our CPU would fry if it weren’t for their fans.

Now imagine you wake up one morning, and your computer fan is making rattling noise; surely this is cause for alarm. Does it mean the fan is bad? We will look into these and more in this article. Just read it carefully, so you don’t miss any important information.

When Should You Be Concerned About Computer Fan Making Rattling Noise

The fans in desktops, laptops, and other computer devices are designed to generate more airflow depending on the task. This is why when handling light tasks like typing and internet surfing, the fan is barely noticeable, but if you’re playing heavy games, you will notice it gets louder. 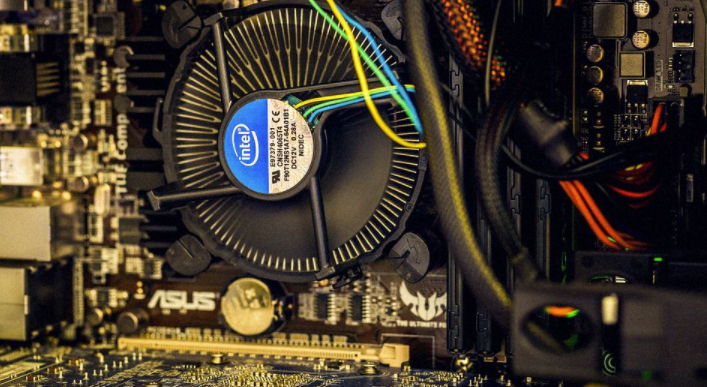 A heavier whirring sound due to increased airflow is not bad, so long as it usually occurs during high-performance tasks. It just means the fan senses the CPU is going at full capacity and wants to keep it at optimum performance temperature. What is considered unusual is;

Things That Could Lead to Computer Fan Damage

When your computer fan is making a rattling noise, several things could be causing it. Let’s consider some of them below.

What to Do With a Computer Fan Making Rattling Noise? 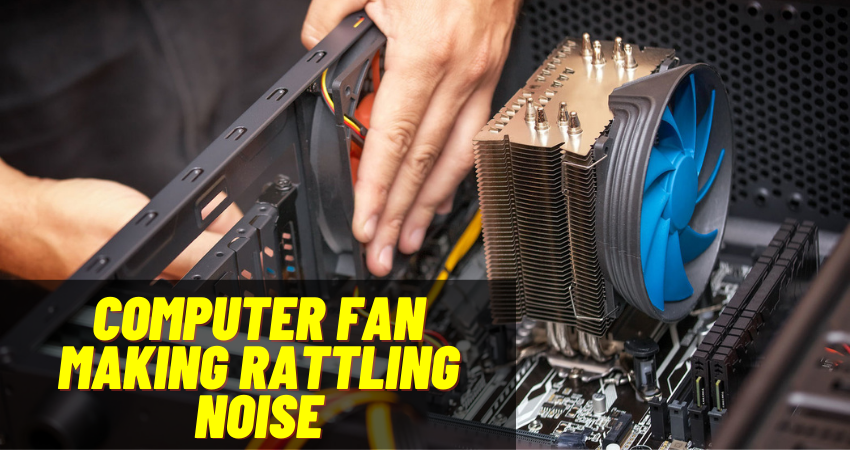 If you use a desktop, you will be able to see the fan section from the exterior of the pc; you need a suitable screwdriver to open this section. After taking off the cover, use a cotton bud to get to tighter areas and a rag where there is more space. You can also use an air blower to remove dust.

Locate any other component in the CPU with a fan, such as the graphic card, and clean them.

It’s easier to notice weird noises in laptops because they’re smaller; most times, you can feel the vibration just by touching it. A simple fan cleanup is the first step; open up your laptop and locate the fan. They’re quite smaller than a desktop’s own, so quick bursts of compressed air from a blower or any other tool might prove to be efficient.

Confirm Your Computer Is Getting Adequate Air

There might be a blockage at the vents where airflow passes through. This could create a mini vacuum where air passes but slowly; in events like this, your fan could make unusual noises.

If you use a laptop, ensure it is placed on a flat surface that allows for maximum airflow. An elevated surface that leaves the fan outlet exposed is even better.

There is a screw or screws that hold your computer’s fan in place. If these screws loose, the fan will rattle on its axis while moving. Depending on the laptop or desktop, there might be a protective covering over the fan blade; loosen this to get access.

Thus, ensure to find out if your computer fan is working properly.

Are There Broken Parts or Screws in Your Computer?

If you use a laptop, chances are it might have fallen down at least once; this is a problem desktops don’t normally have because they are not moved around so much. Sometimes a rattling noise might be a loose screw that is caught in your fan while it’s working.

A good way to confirm if this is the problem is by turning off your laptop and shaking it. If you can hear something moving around, then you’ve found the culprit.

Overheating occurs when the air generated by the fan cannot cool the CPU adequately. When this happens

When your laptop is overheating, it feels extremely hot; you would notice this immediately if it’s on your lap. If it is on a table or any other surface, just place your hand near the exit vent, the air would be very hot.

Of course, when your device is overheating, computation processing will slow down; this would be immediately noticeable. If you have fan management software, it should tell you if the fan is running at optimum capacity.

An overheating desktop slows down; you suddenly notice it’s taking a lot of time to load programs. Place your hand near the fan exit vent. Is it hot?

It could also be a ventilation problem. It’s easy to find a temporary solution for desktops, just put on a fan and face it toward the air intake vents; if your pc suddenly gets faster, you would know it was the fan all along.

Run Software’s Within Your Computer’s Capability

Computer fans are designed to supply just the right amount of airflow according to the computer’s temperature. You might have noticed your fan is at a steady light hum when running light tasks, but it gets aggressive when running high-performance tasks like gaming or video editing.

This regulation is very beneficial to the computer. You don’t want a fan running at full capacity every time; this can heat up the circuit board and damage some components in the long run.

When you run the software higher than the capability of your computer, the CPU struggles to keep up; at this point; you will encounter high internal temperatures. It also means you have a fan running at high speeds for long periods. Eventually, the fan loses efficiency and can no longer cool the computer adequately.

If you still have problems after trying all other options, your best bet is to replace your fan. Just be sure it’s actually an underlying problem and not just a loud fan. High-performance fans found on a computer like gaming laptops are very loud naturally. This is because they’re designed to bring in an extreme amount of air to meet up with the high-performance programs being handled.

Conversely, your computer naturally has a silent fan but, now you realize the computer fan making grinding noise. This can be because of overloading on the computer.

Get a replacement fan from a trusted vendor, and avoid buying off-brand products; they are well known for being unreliable. You can easily replace it yourself if you know your way around computer hardware; if not, go to a computer technician and change it. It will be a lot easier since you’re only paying for their service.

Your computer’s warranty will likely cover the replacement of problems like this so long as you have not voided it. It will be best to try going through the manufacturers first.

How to Quickly Replace Your Computer Fan 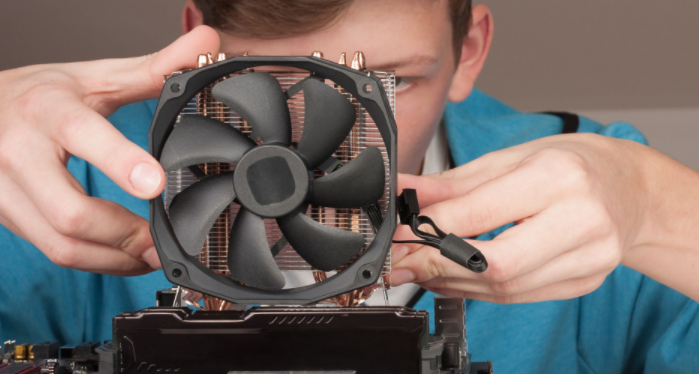 Replace your fan for desktops

Replacing your pc fan doesn’t have to be a big deal; their bigger CPUs are typically easier to navigate through. When performing this replacement, ensure you wear an anti-static bracelet; you can also use an anti-static mat. This video also shows the proper way to open up your desktop’s CPU

Replace Your Fan for Laptops

Unlike desktops, where the CPU housing layout is mostly the same, and differences between manufacturers are minimal. A laptop’s internal layout differs according to product and the model, not to worry though the principle is mostly the same. Using your intuition, you just have to find where the parts in this guide are on your laptop or consult the service guide.

This video also guides you to properly open up your laptop.

That’s it, you’ve successfully replaced your laptop fan, and your system is now ready for use.

Your computer fan making a rattling noise doesn’t have to be a death sentence. By following these troubleshooting steps above, you should figure out what is wrong with it. A simple fan replacement should solve the problem if none of the options work.