If you are buying a motherboard for the first time, you may have numerous questions concerning lifespan, such as how long do motherboards last.

The truth is, motherboards don’t last long if you do not properly care for it. On the contrary, if you don’t put too much strain or don’t demand too much from it, motherboards can last a very long time. Some motherboards that are more than 30 years old still operate.

So, how long does a motherboard last? A motherboard can survive up to 20 years, if not longer. However, the hardware accessible to that motherboard will become old, and you’ll need to update to the latest hardware, but the motherboard itself should continue to function normally.

But that’s not all. In this overview, we’ll go through an in-depth discussion. Let’s get started!!!!

What Can Shorten A Motherboard’s Lifespan?

First off, you should avoid doing anything that can reduce the lifespan of your motherboard. Besides, there are several factors to make if you want to maintain your motherboard working effectively for at least 10 years. They are as follows: 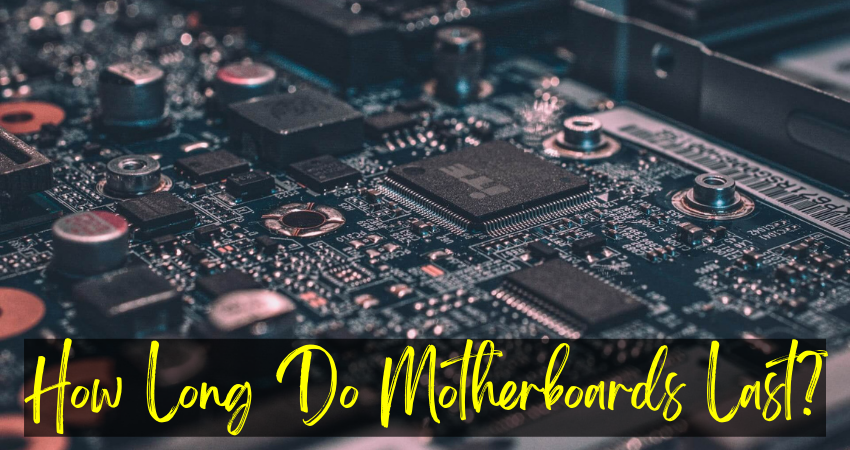 The single most common cause of motherboard failure is heat. Computers create a large quantity of heat when in use. If you have a 500 W power supply inside your computer, the components will convert more than half of that power into heat energy.

If the heat in the computer is not dissipated, it can gradually overheat components on the motherboard. As these circuits are overheated, electrons begin to flow into other areas of the component. Electron bleed destroys transistors and electronic routes in chips, eventually leading to failure.

As with all of us, various parts on a motherboard will break out as it ages. The parts on your motherboard may ultimately wear out when electrical currents run across them.

Capacitors are the most prevalent offenders since they store charges for short periods of time. They begin to decay as they cycle.

While they will continue to function as they decline, it is something to think about. Cheaper motherboards will have poor quality capacitors which might deteriorate much faster.

A motherboard can be instantly destroyed by water. If you drop a liquid on your computer, the chances of it ever switching on again are almost 0%.

This is because salts present in water make the fluid electrically conductive. As a result, when water suddenly flows across the surface of an electronic board, such as a motherboard, practically every conducting surface comes into touch with one another. This immediately shorts out the entire motherboard, thus killing it.

Even humidity in the air can cause some shorting (as well as bacteria development), so maintain it in a cold, dry environment.

Physical damage to the motherboard is uncommon, though not unheard of if you construct your own computer.

If you frequently move your gaming PC, say to transport it around to a friend’s house, the repeated movement might loosen components. Soldered joints will eventually become loose, or heat sinks will detach from the chip surface, and these issues can lead to additional failures.

Furthermore, if huge fans are not correctly installed, the vibration from them might harm components throughout time.

A motherboard will occasionally fail due to regular wear and tear. This might be a mix of all of the difficulties listed above.

Over time, humidity in the air can cause some forms of bacteria to develop on the PCB, which then slowly chips away at your PC’s components, including the motherboard!

Increase the Lifespan of Motherboards by Doing The Following Things 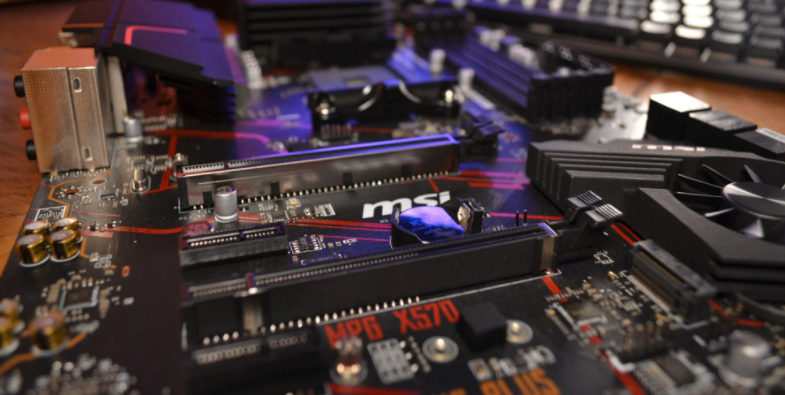 Don’t Overclock Each and Everything

Overclocking happens when you boost your computer’s performance by raising the regularity of its components.

For example, to get high performance, you can overclock the rate of CPUs from 3 GHz to 3.5 GHz. Overclocking, on the other hand, may shorten the life of your computer’s motherboard and other parts.

Overclocking increases the electrical load on your parts and creates extra heat. By avoiding overworking your PC, you can increase the life of your motherboard, preventing you from spending more on purchasing one.

Do not allow dirt or dust to accumulate on your PC’s motherboard. Dust, like fur, acts as an insulator on the motherboard, between its hot components, and prevent fresh air circulation inside.

This sort of event increases the heat load on your motherboard’s parts, causing it to shut down or malfunction sooner.

To clean your computer motherboard, just open the case and use compressed air to remove any dirt from the motherboard.

The motherboard of your PC is a large circuit board that directs electricity from the power supply unit to each component and allows them to connect with the Computer Processing Unit.

If the computer’s motherboard is caked with hair, lint, and dust, it prevents effective communication skills with all other parts, including the power supply.

This sort of dust can generate a dangerous buildup of heat, which can lead to short circuits and damage to the board itself. You may use compressed air to remove trash and dust from the computer motherboard.

A wet cotton brush is used to remove stuck-on grime and tenacious stains. Thus, by cleaning your motherboards, you may extend their lives.

Good ventilation may assist keep your motherboard and other components cool in your computer. Because hot air rises, the components at the rear of your casing will become hotter. Keep it in mind while you create your computer.

If feasible, place fans at the top and rear of the case to assist encourage proper airflow. To assist with cooling, you might also invest in an all-in-one water cooling system.

You must keep moisture away from your computer. If you really need a liquid while playing, keep it away from the case, put a lid on it, and be cautious. If you reside in a humid climate, you should keep your case as cold as possible.

The easiest method to do this is to set moisture-absorbing stones around your PC, get drier, and minimize the moisture surrounding it as much as possible. Keep plants or a fountain away from it, for example.

As a result, the motherboard of a laptop may have a lengthy lifespan.

Heat is a component killer in computers, and computer temperatures may rise quickly. Even if you maintain your computer’s motherboard clean, there is still a potential that your computer can have heat-related problems.

You must ensure that there are at least 6 inches of air space around the entire structure. Keep the tower away from heat sources such as the air conditioning vent or radiator. Overheating can cause the motherboard to twist.

The power supply is attached to your computer motherboard and transforms the alternating current (AC) electricity from the house electricity to the DC voltage required by your PC motherboard, allowing the remainder of your PC to run.

If these components fail, it is possible that unstable voltages will be transmitted via your PC motherboard. This might fry or destroy the various components and circuitry on the board, rendering your electronics useless.

Symptoms of a malfunctioning power supply include erratic shutdowns, odd noise originating from various systems, and failure to startup.

As soon as you notice an issue, change the group before you encounter total failure and risk destroying your whole motherboard.

On average, the lifespan of a standard PC motherboard might range from a few weeks to decades. Most of the time, it will last 10 to 20 years. Tip: If you want to preserve a motherboard for a long time, you should take care of it by avoiding doing anything that will damage its hardware.

Can the motherboard be repaired?

A damaged motherboard might be the reason for your laptop not turning on at all. However, in many cases, a motherboard may be easily fixed. In some circumstances, you may be able to replace the motherboard without replacing the other parts, saving you a significant amount of money.

How much does it cost to get a motherboard replaced?

In this post, we examined how long your motherboard will last. We next looked at some of the reasons why motherboards fail, as well as how a motherboard is likely to be obsolete long before it breaks.