You don’t have to be a techie to realize that the computer is our most-used electronic device. And, if you use a computer on a regular basis, you should be aware that it has a primary source of processing power and all your computer’s power comes from the Central Power Unit (CPU).

Your computer, however, may act weirdly at times, and the worst-case scenario is if it shuts down while you’re working. In this circumstance, we feel you would be outraged. This can only happen if your CPU is dead.

But, how to tell if a CPU is dead? Well, you can do so simply by monitoring the symptoms of a dead CPU, but one of the most prevalent signals is when your computer fails to power on.

Besides that, a dead CPU can cause your computer to become completely unusable. As a result, understanding how to detect a dead CPU will benefit you.

For your convenience, we will go over everything you need to know about a dead CPU in-depth in this article. So, let’s get started!!

How to Identify if Your CPU is Dead?

Is your computer’s processor really dead? How do you know whether it’s true or not? As far as we’re concerned, you don’t want to risk further damage to your computer just because you don’t know how to identify if your CPU is dead or alive. But don’t worry; in this section of our article, we’ll go through all of the signs and symptoms of a dead CPU. 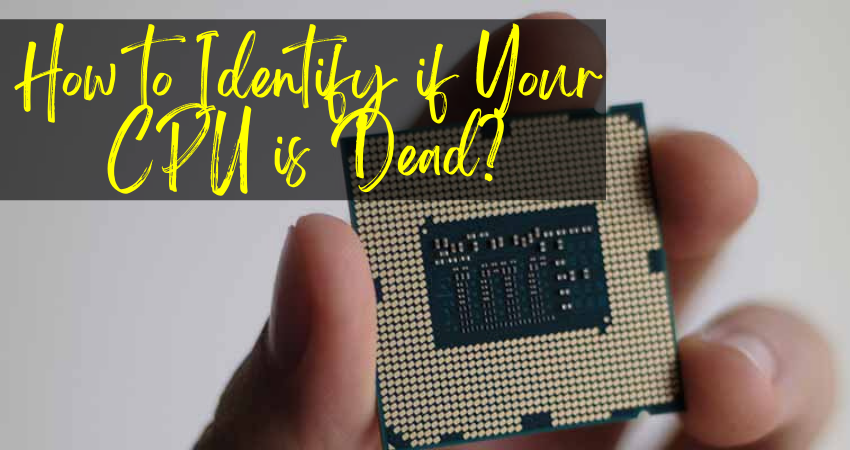 Simply put, if any of these symptoms appear, understand that your CPU is dead. While other malfunctioning components could be causing any of these issues, but if you observe more than one of these in your computer, your CPU is most definitely dead.

So, without ado, let’s get into the details.

Listen to The Sound

You might be thinking that out of all the things, how can sounds determine the life of your CPU? We understand your curiosity and we will tell you why.

Mind you, most motherboards include a beep code speaker, which sends out sounds to indicate which portion of your computer is malfunctioning. As a result, comprehending the sounds can help you figure out what your computer is trying to say.

As a result, we recommend that the moment you turn on your computer, you should hear the sound it makes very carefully.

But one question might come to your mind how will you know which kind of beep indicates the failure of your CPU? We got you!

Hence, when you are running your computer, you may hear one beep, two beeps, and so on. Even though each beep has a meaning, but if you hear 5 short beeps all at a time, then be sure that your CPU has failed.

You obviously know what your computer looks like when you turn it on, right? Examining your computer’s functionality is the simplest technique to detect whether or not your CPU is dead.

As a result, pay attention when you try to turn on your computer to comprehend its functionality. If it doesn’t turn on and nothing happens even when it’s connected to a PSU (Electricity Supply Unit), it’s because your CPU can’t handle the amount of power required to start your computer.

Aside from that, your CPU’s fan may spin for a few seconds before shutting off.

Isn’t it cool that your computer can perform a power-on self-test (POST), which allows it to detect whether or not something is amiss with your hardware?

If there are no problems with your computer during the POST process, it will run smoothly and boot normally. Your computer, on the other hand, will not boot up properly if an issue is discovered.

Even after using this method, your computer still does not show the POST screen, then your CPU is most likely defective!

The computer is Shutting Off Randomly

If you were working on a crucial assignment and your computer suddenly shut down, that would be the worst and most frustrating thing that could happen to you, right?

But, have you ever questioned why your computer keeps doing this? The primary cause of this is that your PC is severely overheated.

And, your system may have shut down automatically to prevent further harm due to overheating. Furthermore, defective fans are the most common cause of overheating.

So, if this problem is not addressed quickly, it will worsen. As a result, it’s critical to keep an eye on them and, if necessary, replace the cooling systems.

The Computer is Not Turning On

Have you ever had a problem with your computer not turning on? Have you ever thought about why this is taking place?

And, the dead CPU of your computer is to be blamed for this situation. However, this situation can come in two forms. One of them is that your computer will not respond even if you turn it on. And the other is that the fan will spin for a few seconds before shutting down.

But, keep in mind that this can also occur as a result of other malfunctions of your computer but since we are only focusing on the symptoms of a dead CPU. So, make sure you check your CPU when this happens!

Many of us have encountered system freezing on several occasions, and it is without a doubt one of the most inconvenient issues.

Simply put, system freezing or lagging is a highly prevalent cause of CPU failure. And, it can happen at any time of day, especially if your computer is in use, or even if the machine is sitting idle. It can also happen during the bootup process.

To be clear, lagging in your computer can take a variety of forms. To begin with, your computer may stop responding and cease to work altogether. Second, your mouse pointer may become stuck.

However, freezing can occur as a result of hardware or software failures. However, it is ideal to believe that random freezes are the result of a defective CPU.

This issue can be resolved with proper troubleshooting!

You’re probably aware that your computer can have a variety of issues, and the blue screen of death is unquestionably the most serious of them all. This issue is most commonly encountered in Microsoft Windows operating systems.

Your computer screen will turn blue as a result of this system problem. You’ll also see an error code that contains all of the details about why your system isn’t working properly.

It’s crucial to realize that this problem might strike your computer at any time due to broken hardware, but it’s reasonable to assume that a faulty CPU is to blame.

Causes That Can Kill a CPU

If you have been wanting to know what can cause your CPU to die after you noticed all the symptoms of a dying CPU, we got your back!

However, because there are so many aspects to consider, it’s difficult to say which of the reasons is actually impacting your CPU and inflicting so much harm.

Viruses are designed to attack your system files and data, but not always, and viruses could be one of the causes of a dying CPU. Viruses might tell your computer to switch off the fans, causing it to overheat and cause more harm.

Knowing all of the issues will help you not only figure out why your CPU died, but also ensure that your CPU is safe in the long run.

Thus, let’s get to know the reasons together.

You must be doing overclocking because of the benefits it has to offer and how you want your processor to have that extra speed.

The basic requirement for overclocking is to add extra voltage to keep that flowing and this extra voltage is where all the problem lies. While we understand the benefits, it is also one of the core reasons for a dying CPU.

Understand that, nothing lasts if you are forcing it beyond its capability.

It is critical for people who use their computers frequently to keep the CPU at low operating temperatures.

Even though nowadays, CPUs are designed to tolerate high temperatures but exposure for a long time might cause irreparable damage to your CPU. As a result, we do not recommend it.

However, even with your computer’s normal fan working, it might still end up producing so much heat. You can take the laptop to a professional or learn how to tweak your CPU fan speed without BIOS.

In some cases, you might have a damaged CPU cooling fan, which can be a strong cause for a dead CPU. SO, you’d need to know how to remove CPU cooling fan and replace a new one.

A Surge in Electrical Power

If you’ve ever been told to turn off your electric appliances because of a power outage or illumination, you’re probably asking why.

Lighting or a power outage, in technical terms, generates a surge in electrical power by spiking the electric current to a very high level, beyond the CPU’s built-in protection mechanism.

However, not only does this harm your CPU, but it also harms your other appliances.

Keep in mind that a motherboard’s function is to connect all of your computer’s components so that they can work together effectively.

And, just like a good motherboard can serve many purposes to your computer, a bad motherboard will also help your CPU to die.

Unstable voltage might also be a major cause of your CPU’s demise. If your CPU is not linked to a good PSU, it will not receive the level of power it requires. A low-cost PSU will also wreak havoc on the rest of the computer.

If you wish to save your computer and its components, we recommend that you avoid using a low-cost PSU. Always put money into a good one!

Wrapping It All Up

That’s all, good people. We believe that our article helped you to understand how to tell if a CPU is dead. Now, even if you are not a tech expert, you can easily diagnose it and start to retrieve your faulty CPU or go for a new one.

You have our best wishes and complete support! Good-bye!!